No Pain No Gain: the Goodness of Feeling Sore

Some discomfort is to be expected when you are new to exercise or taking your fitness routine to the next level. However, there are limits. A common problem for the overzealous among us is asking too much of our bodies before they are physically able to handle the stress. We start out too fast and, unfortunately, get sidelined by too much pain. Yes, there is some gain in a little pain but when you overdo it any gain you could have expected is actually lost.

Where Does the Pain Come From? 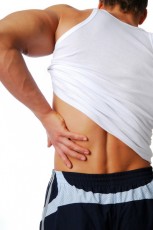 The soreness you feel after exercise is often referred to as delayed muscle onset soreness (DOMS). DOMS usually sets in several hours or even as long as a day or two after exercise. Don’t be alarmed by mild to moderately sore muscles. Again, this is perfectly normal. You should be concerned if severe pain makes daily tasks such as walking or moving your arms feel nearly impossible. Extreme pain is a signal that you overdid your routine or did not allow your muscles enough time to recover between sessions.

Don’t use pain avoidance as an excuse not to challenge your muscles. Some pain is a signal that you are asking more of your body, which is important as your fitness program builds. In fact, the soreness you feel is caused by small tears in the muscle and connective tissue that occur with exercise. Your body is working to repair these tears and as it repairs them it is helping your muscles adapt to the demands of your fitness routine. Protein and carbs within 30 minutes of a workout can help this process

What to do about the Pain of Overtraining.

One of the goals of exercise is to build muscle, strength and stamina. Notice that “injure yourself”  is not included among those goals, so pay attention to the signals your body is sending you. Pain that is severe or continues for several days is a sign of overtraining, so scale back.

Some go to remedies for relief include:

There is some gain with mild to moderate pain but only if you don’t overestimate what is possible. If you haven’t exercised in years begin gently. If you have been exercising for a while but missed several days due to vacation or illness, scale back until your body becomes reacclimated to your routine.