Maximize Yourself For Speed 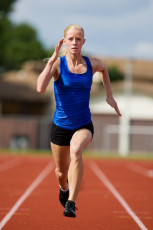 It’s said you can’t coach speed. You either got it or you don’t. That statement might bear some truth, as some athletes are gifted with the ability to run faster than others. This doesn’t mean that you can’t maximize yourself for speed, however. You can become as fast as you can become with the proper training. The Olympic sprinters you see blazing the track or the football players who pulls away from the defender and outruns them to the endzone all trained for speed. They weren’t satisfied with what they were born with, whether they were gifted with speed or not.

Don’t confuse speed with agility, either. Speed is the ability to outrun someone next to you or catch up to a fly ball in the outfield. Agility aims more for the quick movements, generally side-to-side, or the ability to change pace rapidly. The two can be very correlated, but not every fast athlete is also agile. It really depends on the type of training.

When maximizing yourself for speed, your aim is to get faster. Speed can help you in every sport, and speed helps you burn more calories, so training with sprints, for instance, can help boost your metabolism and help you lose weight. That’s just one example of gaining speed. Here are a few more ways to maximize yourself for speed: